Will Computer Science Education Help or Hurt Our Democracy?

It’s widely accepted that computer science education is foundational for preparing students for college and careers. We agree — but CSforCA doesn’t stop there.

We believe computer science education is important to equip students to participate in our democracy and engage in our communities.

An educated electorate relies on understanding our technological world. Whether it’s unearthing algorithms that benefit some while marginalizing others, or considering the ethical implications of driverless cars, or analyzing the role of robotics in replacing human workers, computer science is playing an increasing role in nearly every aspect of our society. More equitable access to computer science education makes sure we have diverse voices developing technology that serves the social good.

Recently we’ve seen the potential for our civic engagement to be undermined. Sadly, computer science may be helping to make this possible. From Russian hacking into our elections, voting machine fraud, to Iowa’s botched caucus count, these are all made possible by computer technology and computer science.

Our students need to understand how computing can change things so our democracy stands strong and all voices are counted. But it’s not enough to just examine ethics and the technology itself. Students need to act on their values with a vote at the ballot box.

An analysis conducted by the Institute for Democracy and Higher Education at Tufts University, showed that college students studying STEM disciplines were among those least likely to vote. Given what’s at stake in the upcoming election, our computer science classrooms need to focus not only preparing our students for college and careers — we also need to emphasize the connection between improving our communities through technology while also transforming them with their votes.

Julie Flapan, Co-Director of CSforCA and Director of the UCLA CS Equity Project

What do our coalition members think about computer science education and democracy?

“As long as consumers and creators come from separate groups, the decisions about the role technology plays in our lives will be made by the few on behalf of the many. Democratizing technology means breaking down the old barriers so that anyone can be a creator, regardless of their gender, zip code, race, or language background. Skilled creators make critical consumers, which ensures that no one group can use technology to disenfranchise another.”

In her book Race After Technology, African-American Studies Professor Ruha Benjamin refers to the ‘New Jim Code’ — how technological design can replicate social divisions, perpetuate racial bias, and reinforce power hierarchies. An example of this would be facial recognition systems that cannot properly read black faces, but are being used by police districts and some school systems.

The truth is that while technology has long been lauded as a way to eliminate human error and biases, instead the opposite can occur. Unless our computing expertise knowledge base includes representatives from all populations (which is the mission of CSforCA), new technology will be designed in these ways that undermine democracy.

Because of this, I strongly believe in CSforAll and that students learning computer science should also be learning ethics and civics education!”

“While not directly related to elections, Code for America’s recent role in identifying those eligible for dismissal of marijuana convictions in California underscored the power of computer science for civic good. As a result, nearly 66,000 people in LA County will benefit thanks to an algorithm developed by the non-profit, let alone those involved in other county pilot programs.

I’m struck by the promise of computer science to fast-track policy implementation and offer game-changing opportunities to positively impact communities. When harnessed for good and informed by diverse perspectives, computer science has so much to contribute to the public sphere.

This is really just the beginning and I hope to see more, as guided by the needs and aspirations of our local communities.” 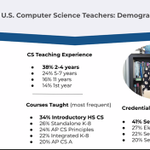