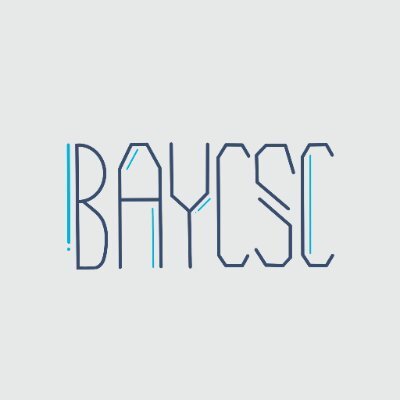 Bay Area Youth Computer Science Council (BAYCSC) is a team of high schoolers that advocates for computer science education. Located in the Bay Area, the group works to expose as many students as possible to computer science by making it accessible, approachable, and, just as importantly, fun.

We talked to three of the BAYCSC Youth Council’s leading members — Supriya, Jessica, and Sara, who were seniors in high school at the time of our conversation. They discussed their pathways into CS, their involvement in BAYCSC, their passion for CS education equity, and their long-term hopes and goals. See below for our conversation with Supriya, and stay tuned for our interviews with Jessica and Sara.

How did you get involved in computer science at school?

I got really interested in computer science in elementary school. I used to play around a lot on Mindstorms as a kid. I thought it was so cool that a chain of simple commands could make a robot do whatever you wanted it to. That interest carried over into middle school, where I was on the Mindstorms robotics team, and I also started to learn about languages like Java and Python, in addition to Arduino and Raspberry Pi. I’ve continued to learn more about CS in high school. It’s been really cool to be exposed to other languages, like Tensorflow, which I learned about through a Google machine learning course.

Being on the BAYCSC Youth Council, I’ve learned more about the pedagogies that go into teaching CS. For the longest time, I was on the receiving end of that, but it’s really cool to be a part of this organization because you get to learn about how you can inspire others to learn CS.

How did you all get involved with BAYCSC?

The seed that would sprout into what is now BAYCSC all began back when I would volunteer at a coding club at Redwood City Library. I met Dr. Emily Thomforde there, who is our primary mentor for this organization. She told me she was thinking about making a team of high schoolers who want to advocate for CS education, and I thought it sounded super cool. Our first meeting happened in March 2019. We were able to discuss our goals and establish what we wanted to do with the organization. We didn’t have everything planned out, but we had a lot of big things we wanted to do, all centered around addressing the national problem of the inequities in CS education.

For the next few months, Jessica and I focused on recruiting people to join. We would host Scratch events at local libraries in the Bay Area. Later, when we had a lot of people, we hosted panel events. Last summer we hosted a virtual speaker series with industry experts, whose careers are based on CS for social good. We started off as a team of three people, who were super passionate about CS education. Now, we’ve evolved to a point where we can host events and recruit other high schoolers, and it’s super exciting.

Apart from the speaker series, what has BAYCSC been doing?

Among other things, we’re planning to fulfill a CSforAll Commitment that we just submitted. In that commitment, we’re working with another non-profit organization in the Bay Area called Learningtech.org. to host six virtual events. We’re also planning on hosting a virtual hackathon for beginners to computer science and coding.

The next speaker series we’re doing is going to cover the theme of “CS + Careers,” so we’re inviting not just industry experts, but also college students to talk about the role of CS in their lives, as they’re pursuing it as a major in college or in their field of expertise as professors or engineers.

Why are you passionate about CS education equity and CSforAll?

My passion for equity in CS education can be derived from two different aspects of my identity. First of all, I go to an all-girls school, and my peers are extremely articulate and empowered. They know what they want to and how they’re going to accomplish their goals. But, whenever I had conversations with my peers regarding computer science, there was this reluctance or hesitation to take a CS class or pursue it. The notion that computer science is a boys’ club has been ingrained in our culture. It’s not just CS, but basically all areas of STEM. That’s partly the reason why I wanted to help start BAYCSC and grow the organization. The notion that even at an all-girls school, there are so many people who do not think they’re good enough to pursue computer science is outrageous.

Secondly, my parents are software engineers, so they’ve always helped me whenever I get stuck on a question or problem. They help me find resources to resolve my confusions. At the same time, at school I’ve had a lot of support from teachers who are willing to motivate me and push me to accomplish my goals — and not just my CS teachers, but all of my STEM teachers. They’ve motivated me to see the interdisciplinary applications of CS and the possible research that can be done using CS as a tool.

BAYCSC is so important to me because I want to help provide under-resourced students with mentors who are willing to give them resources, motivate them, and help pave the way for them in CS-related industries. At the end of the day, one’s ethnicity or gender should not inhibit one’s ability to do well in a particular industry.

What do you think that schools, school districts, or your own school can do to make CS education more equitable and accessible for all students?

Having more empathy and compassion in the classroom can definitely change someone’s life. To give an example, if you’re the only girl in an AP CS class full of boys, and you’re struggling with something, that’s a moment where a teacher can talk to you and say, “We’re going to help you get through this.” Making students feel like they have a community and people they can rely on is important.

BAYCSC’s vision statement is to also increase access and inclusion in computer science through social, emotional, and cultural references. We want to make sure to bring diversity and inclusion into the classroom to make the environment more inclusive for everyone.

Generally, the earlier someone gets into computer science, the more likely they are to stick with it. Is there anything that schools or teachers could do, thinking back to when you were younger, to encourage more kids to take on CS?

Making sure to remind students of the applications of CS by showing them cool videos about a project that Google made, or how Tensorflow can detect wildfires, or how drones can monitor floods, can remind them of the power of CS and what you can do with it. It’s also important to help students think about what they can do with CS in order to help their communities.

I led a Scratch class for girls in elementary school. At the end, they were tasked with a project to determine a solution for one of the problems in their community. Some of the problems that they addressed were major, like climate change. I remember how excited they were to present their work and to know that they could be doing something to help their community with CS as a tool.

Can you think of an example of a cool project that you’ve worked on studying computer science?

Over the past few years, I’ve been working on a system, which I originally made in order to address the problem of mass shootings across the country. Events like Parkland and Sandy Hook were devastating, and after they happened I could see how my peers were extremely upset and scared that something like that would happen when they went to school. I wanted to do something about it.

I developed this system with Tensorflow and Raspberry Pi that can instantaneously identify gunshots and classify them. Once it classifies them, it sends alerts to EMS, police, and other stakeholders. The goal of the system was to decrease the response time of the EMS and authorities during mass shootings in order to minimize the number of casualties. The system is designed to be low-cost, so it’s implementable in schools and small businesses where most mass shootings occur. Right now, the solution that a lot of police officers use is extremely expensive and therefore unable to be implemented in these places and unable to protect innocent people.

What do you want to do when you finish high school in terms of college and your career?

Right now, I’m juggling three wildly different ideas. I’m going between being an art curator, a chemical engineer, and a software engineer. One thing that I do want to continue doing is to be a CS education advocate going off of the work we’ve been doing with BAYCSC. I’m not sure what exact form that’s going to take, but that’s why I’m looking forward to the future. Another thing I want to pursue is research, especially in chemistry. I’m really interested in exploring the applications of computational chemistry to catalysis, which is an extremely applicable field to a lot of problems we face today, like climate change and the COVID-19 pandemic.

Did you know that CS can be integrated into other subjects?

Find out how by coming to our CS + 1 = Convergence webinar with @uclacenterx Wednesday 2/2 at 4pm PT. 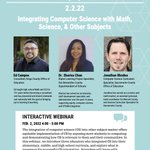